There is a whole world of Agile beyond software, technology, and ‘typical’ environments, and Agile in a low- or non-tech context. It’s super interesting, relatable, and illustrates the Agile mindset and principles nicely – but it is not the first thing people think about when they think Agile.

This is why I wanted to share 3 interesting, non-tech examples of everyday Agility that I loved. In no particular order 🙂

Desire paths form where the people actually walk (instead of following the pre-determined pathway).

Historically, desire paths were disliked and discouraged (e.g. by the people responsible for maintaining a park or other public space).

However, some places turned the process around: they did not put pavement in when the buildings were created but rather waited for the paths to emerge.

This was a simple way to get feedback and learn before committing and creating actual paved paths based on the learnings.

#2 The East Gardens of the Imperial Palace
(a.k.a. Managing the Flow Kanban Way)

In his book, Kanban: Successful Evolutionary Change for Your Technology Business, David J. Anderson recollects a visit to Tokyo, and how he was handed plastic cards when entering the Royal Gardens with his family.

At the time, he was not sure what was the purpose, thinking maybe it was to make sure nobody is left behind when the park closes. Later he realized that this was a non-tech way to manage the flow – by limiting work in progress (which is one of the foundational principles in Kanban).

There was a limit to the maximum number of people in the park at the time, controlled by the number of plastic cards available. When you enter, you get a card – when you leave, you give it back. In case there are no free cards, the visitors need to wait for someone to leave and get their card.

P.S. If you would like to learn more about implementing Kanban principles in your life, read my post on Making your Personal Kanban board in Roam Research. There are links for more info on both Personal Kanban and Roam in there.

I really loved this example of being Agile. In Rotterdam, the Netherlands, they test out spots for bike racks, before committing to permanently placing them.

Basically, they bring and park the ‘mobile platform’ that replaces one car spot to accommodate up to 12 bicycles. Once it’s parked, they observe the usage.

In case it works out, they commit and cement ‘real’ racks, if not – they simply move to another spot and test that one out. 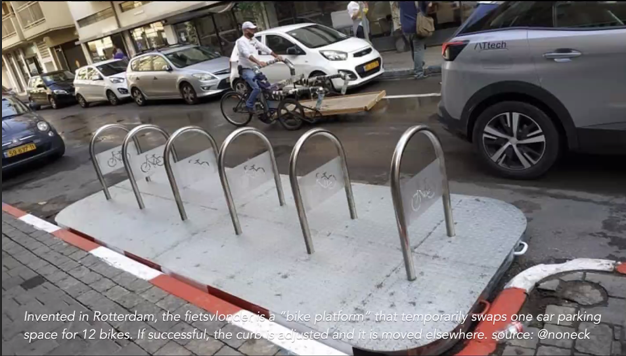 Note: I learned about this example when @jboogie shared it on @AgeOfProduct meetup